In preliminary meetings with representatives from Power and Water, East Arnhem Shire, and Territory Housing, we decided upon a community consultation in which two sides of the water story would be told – the Yolŋu side, and the Power and Water side. We proposed that the community story telling process would lead to discussions about ways forward with community engagement around water management. Posters and leaflets illustrating some of the Power and Water story were prepared in consultation with Power and Water. Other resources that were used during the consultations included; bore reports, maps, satellite images and Power and Water publications. Consultations were held at Milingimbi over four days. Visits were made to people’s homes, to government agencies, and to significant sites around the island including the bores and tanks. People talked about Yolŋu traditional knowledge of water, and the history of water since before the mission days. They talked about their understanding of contemporary water technology and use, how water should be cared for, and how Yolŋu are, and could be involved in water management. 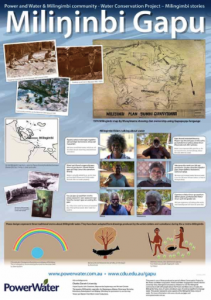 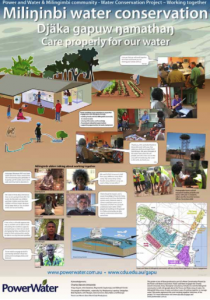 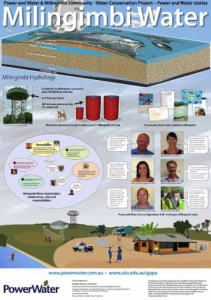