In 2012 CDU was invited to support Ramingining elders to develop and facilitate their own community engagement program, within the auspices of the NT wide LCAP initiative, The Local Community Awareness Project. Anthea Nicholls and Matthew Dhulumburrk, with the support of Tony O’Leary (Ramingining Government Engagement Coordinator), worked together to develop a pilot program, which was delivered over two days in November 2012. It will be offered to the staff of all organisations operating in Ramingining in 2013. Anthea has strong connections to Ramingining and lived in the community for the duration of project development.

Developing the Ramingining Community Engagement Program from the groundup…

The RCE program grew out of conversations between Dhulumburrk and Anthea, notebook in hand. Notes were translated into a PowerPoint Presentation. This visual story was enriched by information found on the Internet – a new player in the telling of stories about the history of Indigenous communities providing photos of the mission at Milingimbi, information about the Macassans and the anthropologist Donald Thomson.

Practice field trips provided new photos and the growing PowerPoint Presentation was checked by Matthew and shared with other Yolŋu, who gave feedback and authority to it. In the workshop that grew out of this process, facilitators and participants used this visual story of the PowerPoint presentation as a pathway, stopping from time to time along the way to share stories.

These stories proved to be particularly powerful since there are still Yolŋu who can tell of first hand experiences – or stories they heard from their parents – which are important to the history of Ramingining, especially its links with the mission at Milingimbi and the impact of a guerrilla style war with early pastoralists. Program development included Shared time on country – recognising country as the foundation for Yolŋu life. Community members joined the elders to demonstrate how the land is like a larder, changing with the seasons. On the first excursion we ate nyaŋura (long-necked turtle) and munydjutj (the green plum Buchania obvata) and saw how the kurrajong yielded excellent string for turning paperback into a water vessel.

The program ultimately follows themes focusing on history, land and people, language, rom (law) and gurruṯu (kinship), ending with the practicalities of ‘Dos and Don’ts’ for visitors in Ramingining … something participants seem hungry to know.However we recognise and acknowledge that this is a very ‘Balanda’, or ‘western’ way of approaching the stories which gird up life in a place like Ramingining, and that for Yolŋu there are no such distinctions; no dichotomies between land and people, people and languages, rom and gurruṯu. The elders demonstrated this as they wove their stories out of these elements. It is expected that as the program continues so too will the evolution of the way the elders choose to share and re-present Ramingining to its visitors. 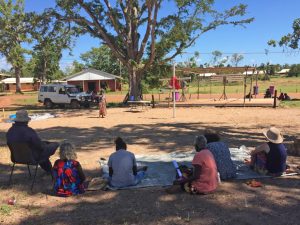